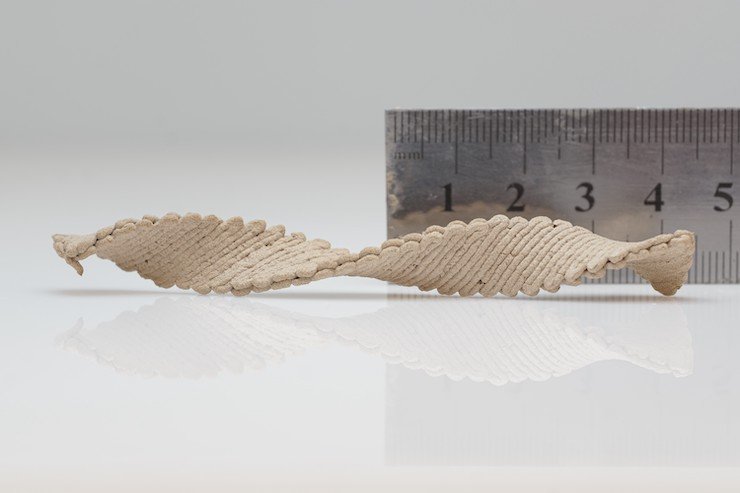 Researchers from the Hebrew University of Jerusalem presented the results of a new 3D printable wood ink from August 21-25 at the American chemical society (ACS) Fall 2022 event. The material is printed flat and then can transform into a complex 3D shape, with researchers suggesting the possibility of furniture or other wood products being made this way in the future.

The way the material works is similar to how in nature, plants and some animals can alter their own shapes and textures. Even after a tree is felled, its wood can change shape as it dries. It shrinks unevenly and warps due to variations in fiber orientation in the wood.

“Warping can be a hindrance,” said Doron Kam, a graduate student presenting the work. “We thought we could try to understand this phenomenon and exploit it in a desirable morph.”

Eran Sharon, Ph.D., one of the project’s lead researchers, explained that man-made structures usually can’t shape themselves, but in recent years scientists have started printing flat sheets that could morph into shapes. 3D after a stimulus, such as a change in temperature.

Most previous automorph sheets were made from synthetic materials, such as gels and elastomers. “We wanted to go back to the origin of this concept, to nature, and to do it with wood,” said Sharon.

The research began a few years ago, when the team developed an environmentally friendly water-based ink made from microparticles of wood waste called wood flour mixed with cellulose nanocrystals and xyloglucan. These are natural binders extracted from plants.

The team quickly discovered, after using the ink in a 3D printer, that the way the ink is deposited dictates the morphing behavior, as the moisture content evaporates from the printed part.

The team found that stacking two rectangular layers printed in different orientations will produce a helix after drying. The team hopes that in the future, further refinement will allow saddles, domes, helices and other design patterns to be combined to produce objects with complicated final shapes, such as a chair.

Ultimately, it might be possible to create wood products that ship flat to the end user, reducing volume and shipping costs, and then have the product turn into its expected shape when unpacked.

Another goal Sharon hopes to achieve with the technology is to make it possible to license the technology for home use, allowing customers to design and print their own wooden objects with a 3D printer.

Speaking about the team exploring the possibility of making the material reversible, Sharon said: “We hope to show that under certain conditions we can make these elements reactive, to humidity for example, when we want to change the shape again. of an object.”

Want to discuss ? Join the conversation on the Discord of the global additive manufacturing community.

Get your FREE print subscription to TCT Magazine.