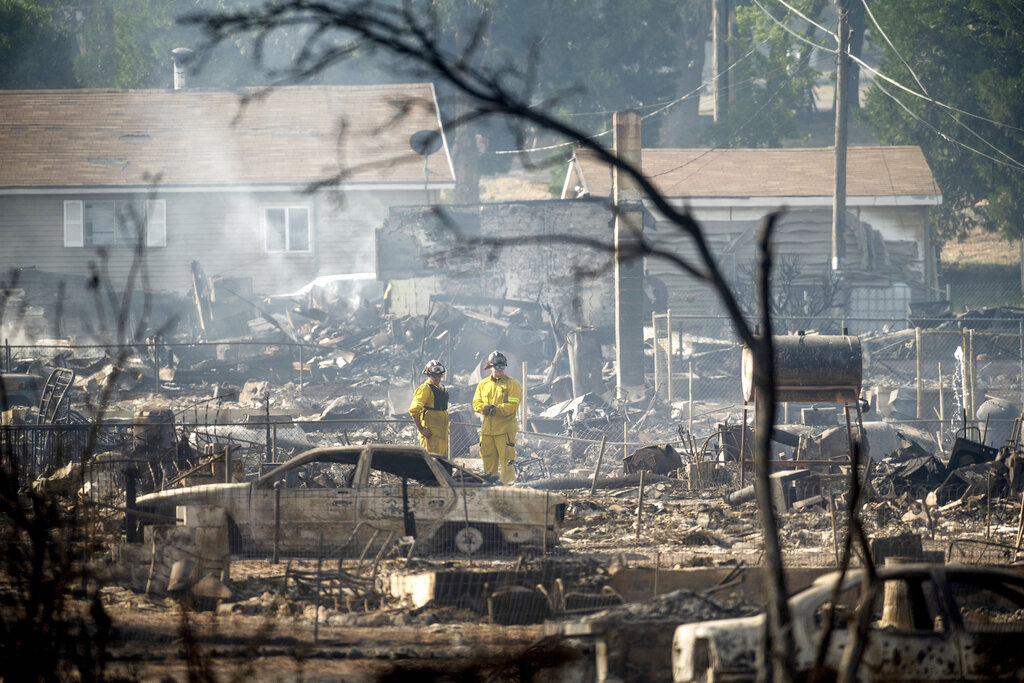 SACRAMENTO, Calif. (AP) — A California man who lost his home in a wildfire last month has sued a wood products company at the center of the blaze, accusing it of failing to face the risk that a fire breaks out on his property.

The fire started near the Roseburg Forest Products Co. plant on September 2 in the small town of Weed, near the California-Oregon border. It eventually burned over 15.5 square kilometers, destroyed 118 buildings and killed two people. The California Department of Forestry and Fire Protection is still investigating the cause of the fire.

The factory generates its own electricity from leftover wood, a process that produces hot ashes which are then sprayed with water from a machine. The company says it is investigating whether this machine, which it says is supplied by a third party, did not cool the ashes sufficiently, which could have started the fire.

On Tuesday, lawyers for Robert Davies, 61, sued the company, saying it failed to ensure the machine was properly designed, inspected and maintained – turning the shed where the ashes were stored “a powder keg awaiting a spark”.

Instead of fixing the machine, the lawsuit says the company relied on its employees to put out the fires, which resulted in “a number of unreported fires at the facility.”

“It raises the question of what has been done from a safety perspective to be able to deal with these fires that have occurred using the appropriate technology and systems that would not rely solely on humans to be able to respond” , said Frank Pitre, one of Davies. “, said the lawyers during a press conference on Wednesday.

The company has set aside $50 million to help victims of the fire, and so far has compensated more than 300 people. This included Davies, who received $5,000. The lawsuit says that was not enough to compensate him for the loss of his 30-plus-year-old home and everything in it.

Pitre said he did not believe the fire was a freak accident, saying multiple fires occurred at the site leading up to the blaze, known as the Mill Fire, which started on September 2. He added that the area was known for its high winds. certain parts of the year.

“We are here to push this forward and find out the truth,” Anderlini said.

Warmer temperatures and drier conditions due to climate change have accelerated the rate of wildfires in western states, scientists say. Wildfires have devastated communities in California, which for the past five years has seen the largest and most destructive fires in history.

The Mill Fire began less than a quarter mile (0.3 kilometer) from the Weed City Fire Department and burned for 11 days. This prompted Democratic Gov. Gavin Newsom to declare a state of emergency in Siskiyou County and resulted in a federal grant to fight the fire and support residents.

Davies, who previously worked for an engineering company under contract with the US military, said he was at home with his 25-year-old son when the fire broke out. After hearing helicopters hovering from above, Davies got out and saw smoke coming over a hill. Within an hour, the smoke reached his house, he said.

Davies and his son left their house with laundry baskets and clothes. Among the items left in Davies’ home were Disney collectibles he planned to bequeath to his 36-year-old daughter.

Davies said his family moved to the house in the mountains, at least in part to avoid crime in the big cities.

“In a way, it was kind of like a fairy tale,” Davies said. “We never had to worry. And all of that was stripped away, not just from me, but from my children.